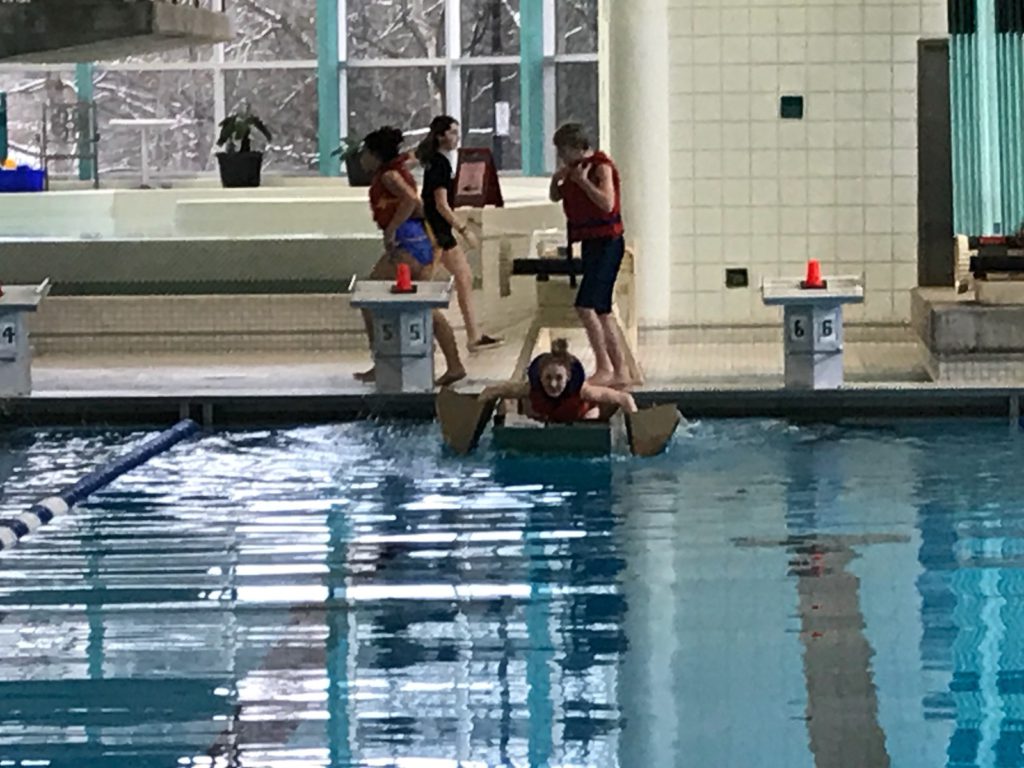 Their cardboard boat held a whopping 600 pounds for 24 seconds before toppling its contents into the pool in Waterloo where the 2017-2018 Skills Ontario Cardboard Boat Races were being held.

It wasn’t enough to place the St. Teresa Catholic Elementary School team on the podium, but the school’s eight players and two teams placed in a respectable fourth and fifth place among 32 competing schools from across Ontario.

For over 20 years, Skills Ontario has been hosting cardboard boat races across Ontario, testing the student’s ability to build a floating structure that will outperform all others in speed and weight challenges.

St. Teresa teacher Craig Smith has been coaching cardboard boat races for more than a decade. Every year he comes back with a few new strategies to pass on to his students. The school’s trophy display is a testament to that experience.

“There’s a big difference, for example, between making cuts in the cardboard and scoring the cardboard. One creates leaks and water is our enemy,” said Smith, who teaches Grade 7/8.

“And our mantra is ‘measure twice, cut once.’”

The whistle blows and they’re off: cardboard boats of varying descriptions and sizes gliding to the other side of the pool, their builders madly paddling for all they’re worth. For those with good designs and a bit of luck, the cardboard vessels not only make it across the length of the pool, they also hold the weight of team members as they pile in, one by one.

The competition is designed to test math, measuring, construction, design, team work and some artistic flair, as teams decorate their boats. St. Teresa teams built a “magic school bus” and a pirate ship, for example.

Teams of four are provided all the necessary materials to build a boat in just two hours. Students must bring their problem-solving, teamwork and design skills as they create a seaworthy structure out of two sheets of 4′ by 8′ corrugated cardboard and some duct tape.

The St. Teresa teams earned their way to the provincials after placing first and third in the qualifiers in Belleville earlier in the year.