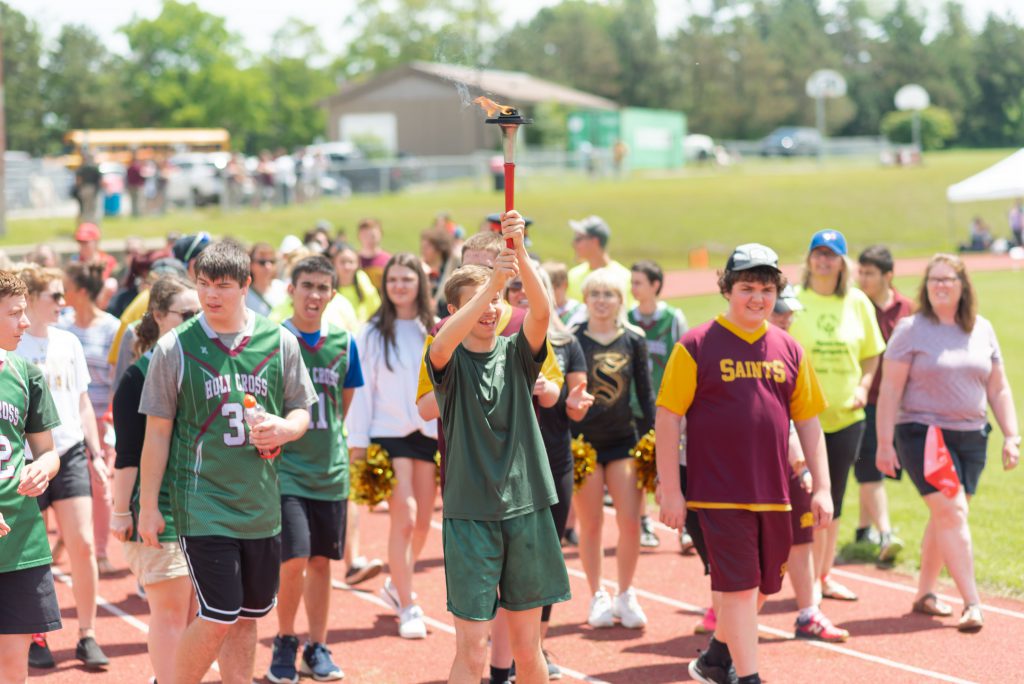 Story by the Peterborough Examiner. Photos from PVNCCDSB.

More than 100 students from three schools took part in the Hometown Games, held at St Peter Secondary School in Peterborough Wednesday, as part of the celebration for the Special Olympics.

The Hometown Games is a new initiative through the Special Olympics Ontario, which started this year.

Students with intellectual disabilities took part in five events including long jump and shot put, along with 100-, 200- and 400-metre races.

Winners were competing for medals and ribbons as people cheered them on throughout the events.

“The torch run happens all over the province in the month of June, every community does a torch run then, and they get officers from all the different law enforcement agencies,” said Andrew Burdette, and auxiliary inspector with Peterborough Police.

“We get as many athletes as we can and sometimes, it’s not even a run anymore it could be a stroll or a jog.” 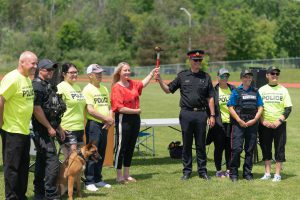 The Law Enforcement Torch Run has supported the Special Olympics since 1987 and recently donated about $1.1 million to Special Olympics though a cheque presentation by the Ontario Association of Chiefs of Police.

“The messages of acceptance and inclusion are a big piece of society, and that we just want equality for all which aligns with our goals and vision,” said city police Insp. Neil Collins.

People who come out to the event have their world changed by the positivity and all the smiles that come from watching these children and youth enjoying themselves, he said.

“It doesn’t take much to come down here and just see the energy this event generates and the togetherness, it just melts your heart,” Collins said.

“It’s something that once you experience it, you’ll never forget it.”

After a long two years of not holding the Special Olympics due to the COVID-19 pandemic, it is great to be back and to see the children’s smiling faces again, Burdette said.

“We just see the value in making great lasting friendships and relationships with all the special athletes and it’s just something we enjoy doing,” he said.

The decision to hold events for the Special Olympics only came together about a month ago, as we tried to pull together a track and field meet, said Ernie Ellement, an educational assistant at St. Peter Secondary School who organized the meet.

“The idea was to try to get five or six schools. We had five schools total, but unfortunately two had to pull out. But we’ve had three schools today,” Ellement said. 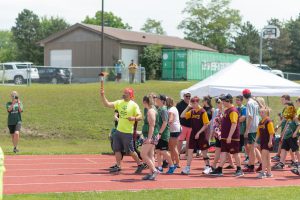 Ellement, who has been doing these events for seven years, said his passion for the events and making the kids happy is what drives him to do what he does for the Special Olympics.

“It’s a passion, and it’s a love of the underdog, kids with, intellectual disabilities, being treated like everybody else, with the same respect other students get,” he said.

“We’re all important, we all deserve to be recognized, respected, and valued.”

For next year, Ellement is hoping to add more events to the roster and have more students involved so that they can enjoy the sports and the time being honoured by the community.

“We have four different schools hosting qualifiers for next year,” he said.

“I’ve signed St Peter’s for baseball and basketball, Crestwood has signed up for soccer in September. And hopefully we’ll have Thomas A. Stewart step up to do bocce ball.”

For most of the children and youth involved in the events of the day, it all comes down to when they cross the finish line, Ellement said.

“It’s all about fun, it’s always been about smiles. You watch the kids race and they cross the finish line, and they just light up.”