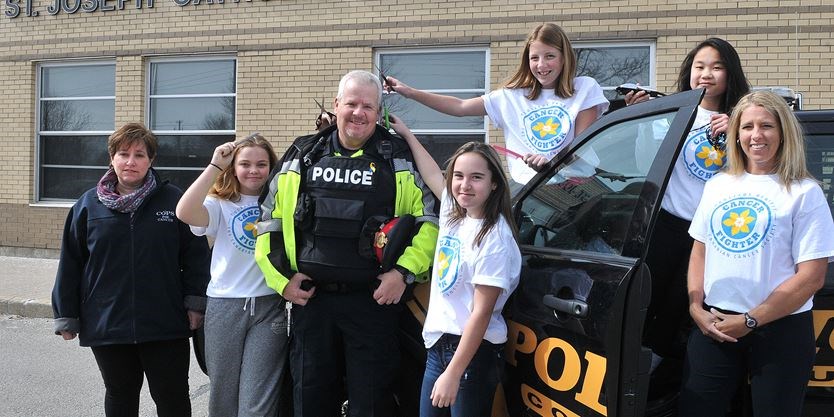 COBOURG — When Leah Kendrick and her classmates discovered only a small percentage of funds raised goes toward childhood cancer research, they knew they had to “raise that bar.”

The revelation came to her before attending the Ontario Education Leadership Camp with fellow students from St. Joseph’s Catholic Elementary School in Cobourg — including Paige Kniff, Piper Lavoy and Madi Richardson.

“Before we went to camp, which is the camp where we learned how to do our project, we found out that of donations that go toward cancer only four per cent go for childhood cancer,” she said. “We want to raise that bar.”

Their solution was to join forces with the organizers of the annual Cops for Cancer head shave charity event in Cobourg, which celebrates its ninth anniversary in 2018.

“We’re going to raise money by hosting Cops for Cancer in our school on April 5 at 1 to 2:30 p.m.,” Leah said. “We have decided to do it to raise awareness for childhood cancer, because we had a friend named Grace Bowen who died of cancer a few years ago.”

In addition to donations from the community and pledges from Cops for Cancer participants, the school is hoping to raise $500 prior to the event and a few teachers have offered some fun incentives.

“We have done two pre-assemblies and will do one more before the event,” Lean added. “If our school raises $500 alone, our teacher (Lori Kendrick, Grade 6/7) is going to be duck taped to a wall and everybody can buy a piece of tape for a toonie.”

Photo: Sgt. Mike Richardson of the Cobourg Police Service and his wife Angie, left, are organizing the 9th annual Cops for Cancer head shave charity event in Cobourg. This year they have teamed up with St. Joseph’s Catholic Elementary School, where the event will be hosted on April 5. Students hope to raise $500 before the big day. Preparing to cut Sgt. Richardson’s hair are, from left, Angie Richardson, Piper Lavoy, Paige Kniff, Leah Kendrick, Madi Richardson and Grade 6/7 teacher Lori Kendrick.