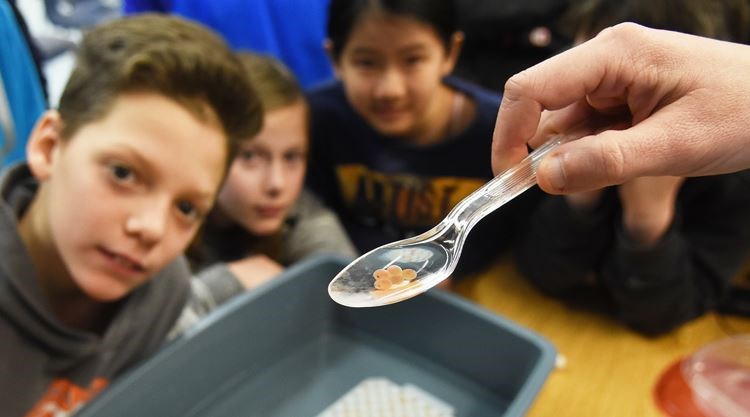 By Lance Anderson, Peterborough This Week

Karl Pelude’s Grade 6 class gathered around as Atlantic salmon eggs were placed into a container and submerged into an aquarium in the corner of the room. There they were sit until they hatch. From there the students will participate in a field trip near Cobourg to release the young salmon into a river in the spring.

This is the 10th year students at the west-end Catholic school have participated in the Atlantic salmon restoration program. This year, the Ontario Federation of Anglers and Hunters (OFAH) program received a substantial boost after receiving a $307,300 grant from the Ontario Trillium Foundation.

Officials were on hand to announce the funding on Thursday and watch as the salmon eggs were delivered in the classroom.

“One of the most exciting aspects of the Atlantic salmon restoration program is the classroom hatchery program. Over the years we’ve been fortunate enough to bring the program to literally tens of thousands of school kids,” says Angelo Lombardo, executive director of the OFAH. “With this funding we will be able to expand our reach. We will be able to introduce 10 new schools each year for the next three years. We will be able to provide a dedicated person to the program to work with teachers and our educators…and help build on curriculum.”

Lombardo says the program is extremely valuable, not only for students, but for the Lake Ontario Atlantic salmon population. One hundred years ago that population became extinct due to urbanization and habitat loss. However, efforts have been made over the years to reintroduce the native fish back into Lake Ontario and its tributaries, mainly through the restoration program.

“We find when the kids are engaged in (this) science based, hands-on learning that it’s not really learning, it’s a lot of fun for them,” says Lombardo. “And they become stewards…and they want to make sure Lake Ontario and the tributaries remain healthy so the fish that they release will remain healthy.”

Karl Pelude, Grade 6 teacher at St. Catherine Catholic Elementary School, says the program is a great opportunity for students who may not otherwise get to enjoy nature. He adds they also learn the consequences of the actions of past people, namely those that led to the local extinction of the Atlantic salmon population.

“And they (students) end up becoming much more aware of what happens because of their actions,” says Pelude. “And they learn a healthy respect for nature.”

Kathryn Peiman, Atlantic salmon restoration program co-ordinator with the OFAH, says one hundred classrooms in the region, each with 100 Atlantic salmon eggs, are currently participating in the program. That means, if all eggs hatch, some 10,000 baby salmon could be released into rivers around Lake Ontario this spring.

‹ The Holocaust in History and Living Memory: The Story of an Ontario Catholic Secondary School Program