The Holocaust in History and Living Memory: The Story of an Ontario Catholic Secondary School Program 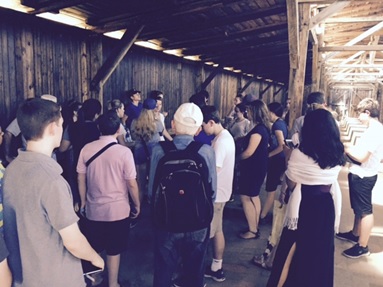 Opening two new secondary schools at the same time, one dedicated to St. Maximilian Kolbe, the other to Jean Vanier, inspired the first ever experiential learning program in Holocaust Education at the York Catholic District School Board. The first namesake, Fr. Raymond Kolbe, OFM Conv. (now St. Maximilian in the Catholic world) was a Polish Franciscan friar who died in Auschwitz in 1941. He had volunteered to take the place of another prisoner chosen to go to the starvation chamber in retribution for a prisoner who had escaped. The second namesake was Jean Vanier, a Canadian Catholic theologian and humanitarian, who lives in a small community north of Paris, France. He is the founder of the L’Arche homes, a worldwide movement of communities that support and care for adults with intellectual disabilities. Their motto is “Changing the world, one heart at a time.”

The first York Catholic journey was a pilgrimage of students, staff, and parents of these two newly formed school communities, to follow in the footsteps of these two humble but renowned men. A significant and memorable part of this journey occurred before we left Canadian soil, through our encounter with Max Eisen, a survivor of Auschwitz himself and a well-known speaker and witness to the Holocaust. Max not only spoke to our group, but helped us to craft our program in such a way that we would be able to help students move beyond the shock of the realities they would encounter, so that we would be able to engage them at a deeper level of empowerment to enact change for the future. We wanted everyone who experienced this to be able to say, “I am a witness!” Max arranged for other survivors he knew to write individual letters to each traveller in our group, to be carried with them and read on the tracks at Auschwitz Birkenau. We received and carried these letters as sacred testimonies, first hand accounts of experiences that had to be painfully difficult to remember and very poignant to read: stories of injustice, brutality, and murder, but also of resilience, courage, and hope. Little did we know that at the end of our journey, upon our return to Toronto, we would meet those letter-writer survivors personally, and would have the privilege of spending time in dialogue with them about our experience and theirs. We would come to know each of them in conversation, and experience their wisdom and their blessing on our learning and work.

Our encounter with Jean Vanier helped us to put this experience in perspective. He encouraged us to consider that at that time and place in the world’s history, people who were nearing the depths of their own despair heaped misery and destruction on others. Conscience was nearly extinguished and the voices of bystanders were all but silenced. Only a few inspired, courageous, and unalterably moral individuals stand out as the heroes who risked everything to try to help millions of Jews and others who were being sent to labour and death camps. Jean Vanier challenged us to not only be witnesses, but to be ready to be those heroes in our own time and place. This was driven home to me as I witnessed a young boy in Paris pointing at the kippah worn by another older boy,  and asking his father, “Qu’est-ce que c’est? The father answered, “Ce n’est pas Français. C’est un étranger!”  Sadly, anti-semitism and other forms of discrimination are alive and well in many places. This was a strong signal that we needed to continue and expand the work we had begun.

Since then, we have conducted four successful programs, now evolved into a two-credit package of English and Interdisciplinary Studies. We want the stories of real people who lived through these terrible events to be told and experienced. Thus, a focus on literature is so important – we are not just learning dates and facts, but are encountering real people with families and stories that need to be remembered. In the Interdisciplinary Studies focus, we look at history, politics and religious experience so students can appreciate the interaction of these various facets of people’s lives and come to see how humanity needs to continually evolve.

Our program includes study days in the spring, two weeks of formal classes in July, and a two week field study in Europe in which we explore the cities of Berlin, Warsaw, and Krakow and experience five different former concentration camps: Ravensbrück, Treblinka, Majdanek, Auschwitz I, and Auschwitz Birkenau. Integral to the program are the activities we take part in to enable the students to process what they are experiencing: intensive journaling, blogging, daily individual conversations and community sharing, prayer, reflections aligning the literature to what is being learned and experienced, and the collection of evidence to add to the student’s culminating activity: a photo-essay and presentation of the learning and its impact on the student. These are shared in a final symposium hosted by the students on the last day of the course for their parents, friends and community members.

The program is now expanding to the Peterborough Victoria Northumberland and Clarington Catholic District School Board and the Regina Catholic School District. York Catholic has been honoured to have been asked on three different occasions to present this program to the broader community in the greater Toronto area during Holocaust Education Week in November. These events have brought clarity to our mission, healing to participants, and a public opportunity for our students to declare, “I am a Witness”. We are honoured to be witnesses alongside so many others, especially survivors like Max Eisen who inspire us to continue this journey of learning. He has always told us to care for each other as we experience these places, to be courageous witnesses, and to follow his example of always putting one foot in front of the other, in other words, to be people of hope.

A final thought: one outstanding memory of our programs was our encounter with Aaron Elster in Treblinka. During one of our visits there, he noticed our group, approached us, and asked, “Do any of you know the way out of here?” (He was asking about the path that led back to the parking lot, but the profound nature of his question was not lost on us!) He then asked us what we were doing there, and we shared with him the story of our program. He shared with us his Holocaust story, having narrowly escaped deportation to this terrible place as a boy, and now, returning to honour the memory of his mother, father, and sister who had perished there. At the end of this moving encounter, he told us to keep doing what we were doing. Indeed, in honour of all survivors and in memory of all victims, we will.