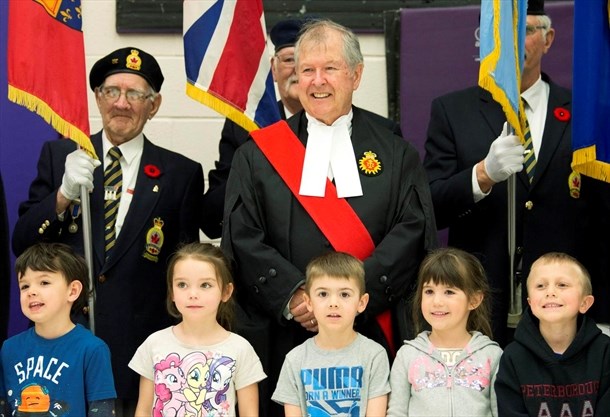 BY Angela O’Grady, Special to The Peterborough Examiner

The gymnasium of St. Teresa Catholic Elementary School in Peterborough was transformed into a court on Tuesday, May 21, 2019 during the Rotary Club of Peterborough-Kawartha’s citizen reaffirmation ceremony.

Staff and students were invited to reaffirm their loyalty and commitment to Canada at the ceremony overseen by Justice Alan Ingram of the Superior Court of Ontario.

Ingram was marched in by an RCMP officer after the colour party of the Royal Canadian Legion Branch 52 was piped in by Dennis Wilson.

As Ingram spoke about Canada, pointing out its beautiful landscape and all the great inventions created here, students’ hands shot up to share where they were born. Syria, Finland, India, Britain, Philippines were a few.

Grade 5 student Klent Barrios moved to Canada from the Philippines about two years ago. He hasn’t taken the oath of citizenship, but he thought Tuesday’s ceremony was good practice.

“I’m excited to take it just like my dad,” Barrios said.

This is the 16th year the Rotary Club of Peterborough-Kawartha has provided this ceremony.