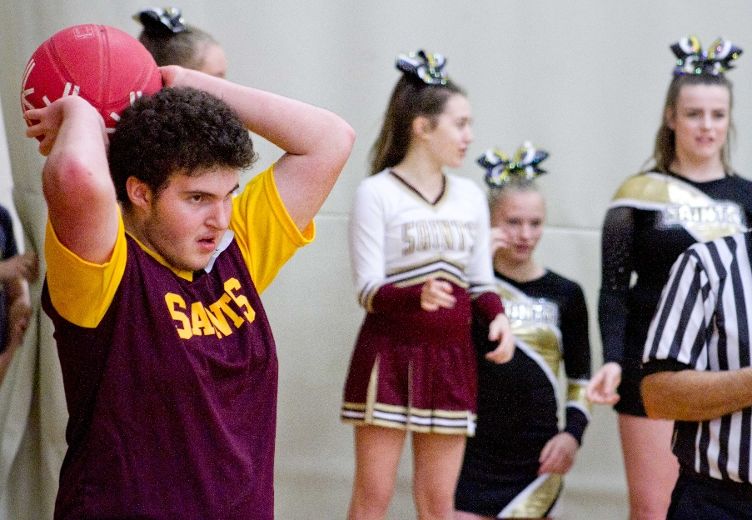 The excitement was palpable as city police and dignitaries gathered to formally announce the news during a break in the action of a Special Olympics provincial qualifying basketball tournament at St. Peter CSS.

“This is a natural spot to have our championships,” MacDonell told the rollicking crowd.

Peterborough has been considered the top fundraiser for Special Olympics, under the annual Law Enforcement Torch Run banner, for 16 of some 30 years, he said, explaining how that’s one of the reasons the city “shot to the top” when it came to choosing a host.

“We wanted to find a community that was really involved … we have a great local program here in Peterborough,” MacDonell told reporters afterwards.

More than 1,000 high school athletes from ages 13 to 21 and coaches from Ontario, Canada and the United States will compete on behalf of their school at venues across the city from May 29 to 31 in five sports: basketball, bocce, floor hockey, soccer and track and field.

The championships, which will be supported by more than 300 local volunteers, will include two divisions, traditional teams comprised entirely of athletes with an intellectual disability and unified teams with athletes with and without a disability together.

City police, who will host the event, are proud to be recognized as one of the top fundraisers and having the 2018 games in Peterborough is a testament to the amount of support for the program, police Chief Murray Rodd said.

City police Const. Grant Eastwood, who emceed the event along with fellow community service officer Andy Hatton, pointed out that Special Olympics has been the charity of choice for the Ontario Association of Chiefs of Police for a reason.

It was amazing sight to see so much spirit on display when she came to school Wednesday, St. Peter principal Sherry Davis told those gathered in the gym. “We, along with all of our athletes here today, will cherish this moment forever.”

Tim Moloney, superintendent of learning/student success with the Peterborough Victoria Northumberland and Clarington Catholic District School Board, recognized Special Olympics Peterborough assistant co-ordinator Ray Walt and the organizing committee for their work. “The games are going to be fantastic and we’re all looking forward to them.”

Peterborough Mayor Daryl Bennett said the city’s motto of Nature Provides, Industry Develops was clearly on display. “We have a great group of industrial people who have done a great job of developing Special Olympics.”

MacDonell cited the inclusiveness of the community and the number of great programs as reasons why there is so much support for Special Olympics in Peterborough. “For 30 years, this service has been one of the top fundraising services in Ontario.”

Special Olympics is a registered charitable organization that empowers those with intellectual disabilities to realize their full potential and develop their skills through year-round sports training and competition.

Wednesday’s School Championships qualifier at St. Peter CSS was one of more than 60 held each year across the province that involve more than 7,000 student-athletes.

Special Olympics Ontario has more than 24,000 registered athletes, almost half of whom are involved in school-based programs, organizers stated.

PHOTO: St. Peter Saints’ Zack McPhail controls the basketball as the team played the Adam Scott Lions in a Special Olympics provincial qualifying tournament at St. Peter Catholic Secondary School on Wednesday, November 15, 2017 in Peterborough, Ont. During a late-morning break in the game action, it was formally announced that the city will host the 2018 Special Olympics School Championships next May. Jason Bain/Peterborough Examiner.