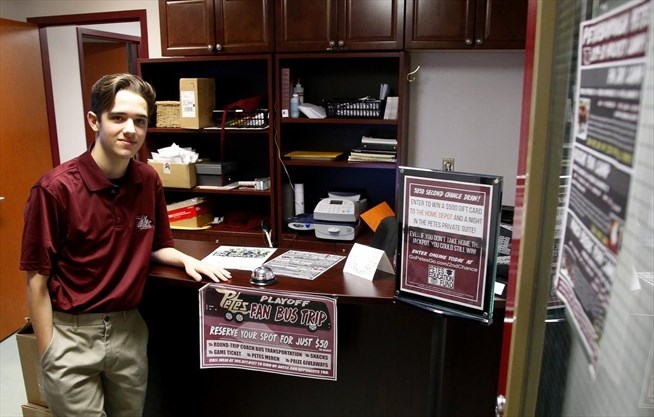 A song that will help rally Peterborough Petes fans as the maroon and white hosts arch rival Oshawa in the OHL playoffs starting Friday was written by the team’s co-op student — a 16-year-old season ticket member and fan since he was four or five.

Matt Sanders, who attends St. Peter Catholic Secondary School, first heard his creation, recorded by The North Coast Band, just before he spoke with The Examiner about the unique opportunity Tuesday.

“It means a lot to me, being the Petes … something so close to my heart,” the St. Peter Catholic Secondary School student and lifelong city resident said. “I rarely spend a Thursday night anywhere but the Memorial Centre.”

Former Petes Matt Puempel and Andrew D’Agostini were his role models and getting to meet the latter in his rookie year proved particularly inspiring, Sanders said. “Those two sort of solidified my love for the team in general.”

He also grew up a fan of the Toronto Maple Leafs and Pittsburgh Penguins, idolizing Sidney Crosby and played hockey himself up until last year, until minor midget.

Sanders, a music enthusiast who enjoys singing and plays some guitar, thought of writing the yet-unnamed playoff song to help fans get excited and to remind everyone that this year’s team could go all the way. “I thought it was a really cool idea.”

He listens to different music genres and describes his song as having a “country vibe,” which he feels is a great match for Canada’s national winter sport. The song cites the history of the Petes, reflects how they play and gives fans more to cheer about.

Here’s the chorus: “Growing up in the city and Kawarthas, driving to the PMC, it’s all worth it every single Thursday night, tonight’s the night for the maroon and white.”

The team aimed to have the song ready to go online by the end of the week. It will also be played during video highlights and clips of mascot Roger in the community, executive director of business operations Burton Lee said.

The North Coast Band, including Duncan Ivany on rhythm guitar and vocals, Connor Ivany on lead guitar and percussion and Wesley Morrison on bass and backing vocals, will perform the song next Tuesday and March 28 in the north lobby of the Memorial Centre.

Sanders plans to take the song on the road, too. When he takes in Game 2 on Sunday — his second game ever at the Tribute Communities Centre — he will have a speaker, so that he can play it for those around him, he said.

As a co-operative education student, Sanders has been a friendly face, taking phone calls, walk-ins, helping with the team’s website and organizing the recent NHL19 tournament.

He’s planning on taking sports management or marketing, so it’s given him valuable hands-on experience for what he hopes will become a career.

“It’s been really cool,” he said. “It’s like being in the NHL and being able to practice with your favourite player. It’s such a good feeling.”