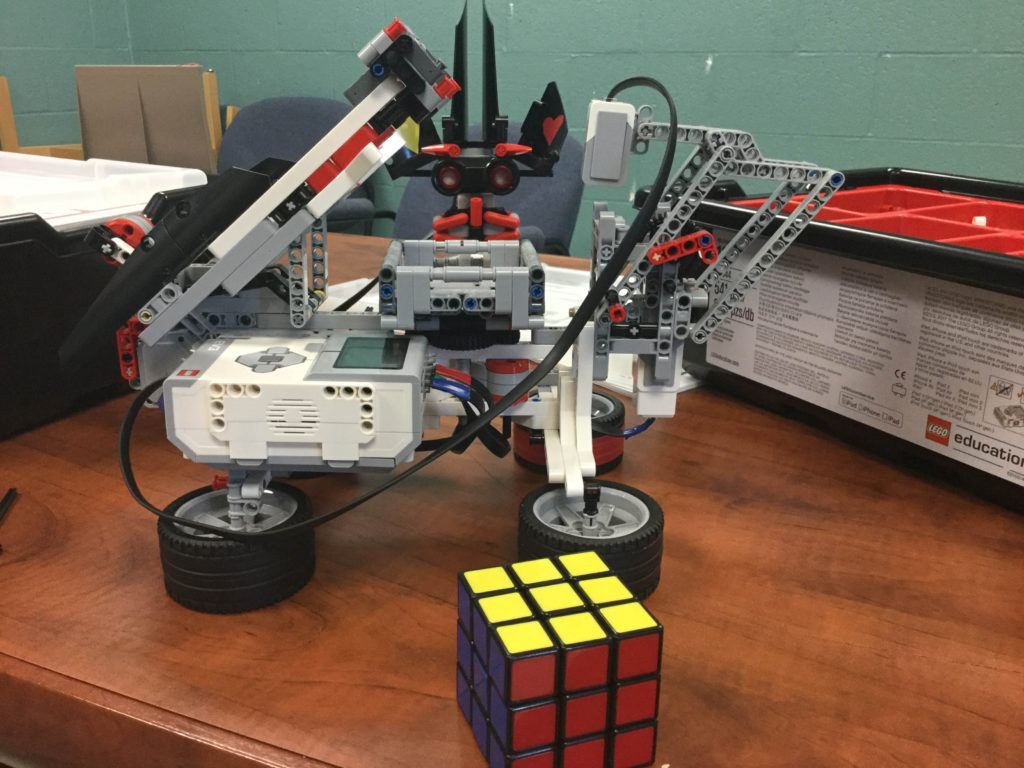 Who can complete a Rubik’s Cube fastest, teen or machine?

That’s a test that has been taking place in the library at St. Mary Catholic Secondary School in Cobourg since the school’s lunchtime robotics club created and coded MindCuber, a robot designed using Lego Mindstorms that can solve the well-known Rubik’s Cube puzzle.

Teacher Librarian Pamela Panopalis was looking for a robotics project that would sustain students’ interest over the spring, one that included creating a robot and coding it from scratch.

“We incorporate robotics in classrooms, but there’s only a two-week period and they never seem to get passed the programing or coding stage, so this was my motivation…to do something from start to finish. To do the mechanics. To do the coding,” Panopalis said.

“I thought, wouldn’t it be cool to introduce a robot that had a legitimate function, not a simulated function, and program it and use it as an exemplar?”

Panopalis searched the web and came across detailed plans for the MindCuber and her group of seven robotics club members began tackling it in April.

With at least three students working on it each day, it took a little more than a month to build the mechanics of the robot before the group moved onto coding.

Then one day it was completed. They gave the MindCuber a Rubik’s Cube and stood back, fingers crossed.

“We turned it on and it solved the Rubik’s Cube. We thought, was this beginners’ luck? And then it did it again. And again,” Panopalis said.

The Mindcuber can solve the cube in under a minute. While none of the students who helped create it had ever solved the Rubik’s Cube, when the group began showing off the MindCuber at the school, students began to challenge it.

“It just caught on from there. All of a sudden, students wanted to challenge the robot, so this is where we’re at,” Panopalis said.

Only a single student has been able to beat MindCuber.

But the challenge has sparked a lot of interest in the project and Panopalis is already searching for the next popular design as she hopes to grow the robotics group next school year.

“I always thought that the library constantly evolves. It’s no longer just about the books. You should have other opportunities like this to explore a robot in the library or to make stuff in the library. It’s not just about reading but actively creating as well.”