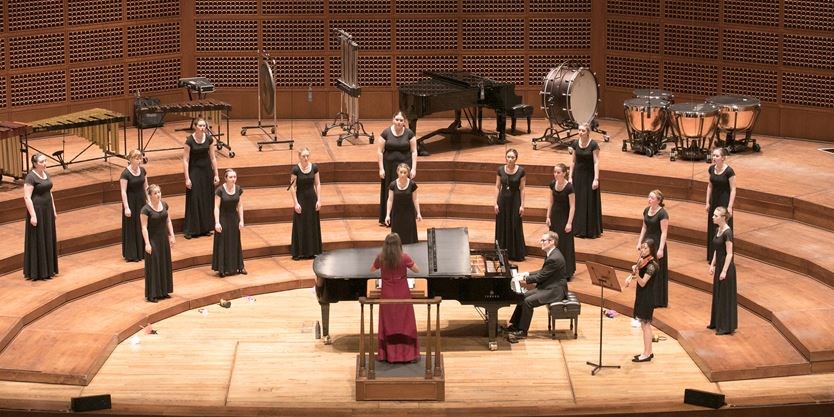 Published in Northumberland News on July 16, 2018

The St. Mary Catholic Secondary School choirs came away with gold and silver at a national competition.

The St. Mary choir and the auditioned choir, the Treblemakers, perform throughout the school year but started to participate in competitions in February, said Tanya Earle, teacher and choir director.

The choirs came away with gold and silver awards at the Heritage Music Festival, more recently known as World Strides, in Montreal from April 27 to 29, said Earle. They both received invitations to sing at a festival at Carnegie Hall. The Treblemakers also received a top mark of 96 per cent from Hilary Apeshtaph. Other adjudicators for their performances this year consisted of Brainerd Blyden-Tayler and Greg Jasperse.

“I am not sure is the choristers realize the calibre at which there are signing or the level of adjudication that they are given. They will, hopefully, one day realize that the people who are adjudicating them are the who’s who in the choral music world,” said Earle.

At the end of February, the choirs were part of the Ontario Vocal Festival, where choirs from all across Ontario perform in their regional festival hoping to gain positive feedback for their group through adjudication and vocal clinics. Both choirs at St. Mary Secondary performed and received amazing feedback from some of Canada’s finest adjudicators, said Earle. The auditioned girls’ choir, The Treblemakers received, and accepted an invitation to the national competition, MusicFest Canada in May in Toronto. The girls took a Gold Award and comments from some of Canada’s most notable voices on the choral music scene.

The Treblemakers also travelled to San Francisco this year to participate in an invitation only, international Music Festival. This was an invitation from their outstanding performance at the Heritage Music Festival in Toronto the year before. The group returned from the festival with Gold rankings. The top choral mark in the festival of 97 per cent was awarded to them.

Each new school year brings a large turnover of choir members making each year exciting and challenging. However, the choirs have remained very successful over the years as a result of everyone’s hard work and dedication, said Earle. The choirs, once again, were complimented on many elements including their choice of music and the sense of community that the group shares with each other and the audience.

Earle says their love for musical excellence and education is evident.

“Music changes lives and choral music shapes students in a way that sometimes they are not even aware of until later in life,” said Earle.

Earle hopes student continue their studies in music, but more importantly, remaining part of a choir as they move forward in their lives.

This year Earle went to Podium, a Canadian choral music conference, attending workshops, lectures and interactive opportunities that left her feeling more connected to the Canadian music scene. Earle knows that most her repertoire will be from Canadian composers and that there will hopefully be many other new exciting opportunities that will take place in Canada.

A Letter to Parents from the Director of Education re: Family Life Education and Mathematics Curriculum ›