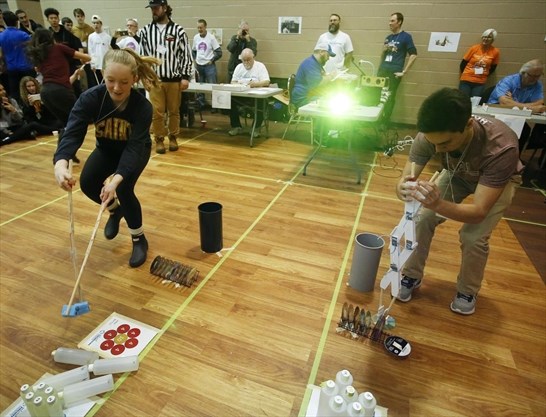 BY BRITTANY WOODCOCK,  Special to the Peterborough Examiner

Peterborough students from seven different high schools competed against one another Wednesday, March 4, 2020 in Peterborough’s annual Engineering Challenge at the Evinrude Centre.

As many as 110 students attended the event and competed in 28 teams, including teams from Holy Cross and St. Peter Catholic secondary schools.

Jacob Duda, a Grade 12 student at Holy Cross Catholic Secondary School, was one of them.

Duda has been coming to the challenge for four years now and said it’s satisfying to use the knowledge he learns in school in his life.

“It’s always super fun working with everyone and it’s just super challenging,” he said. “It’s also really fun to get to apply the knowledge we’ve learned in all of our classes. Especially physics. It’s really satisfying to see it pay off.”

The engineering challenge gives students the chance to learn what being an engineer is like by building a device.

This year, students had to build a remote object manipulator that could pick up different types of objects and get them to the scoring area.

The objects include: a hockey puck in a crate, CDs with the hole covered, golf balls in a cylinder, small bottles, a large bottle filled with water and a large bottle that’s hall full.

Duda talked about his team’s strategy in the designing process.

“Every year I come here, the design that is the simplest usually does very well. So we just picked the easiest thing we could come up with that had the least amount of moving parts,” he said. “The less complicated it is, the less (of a chance) it has to fail.”