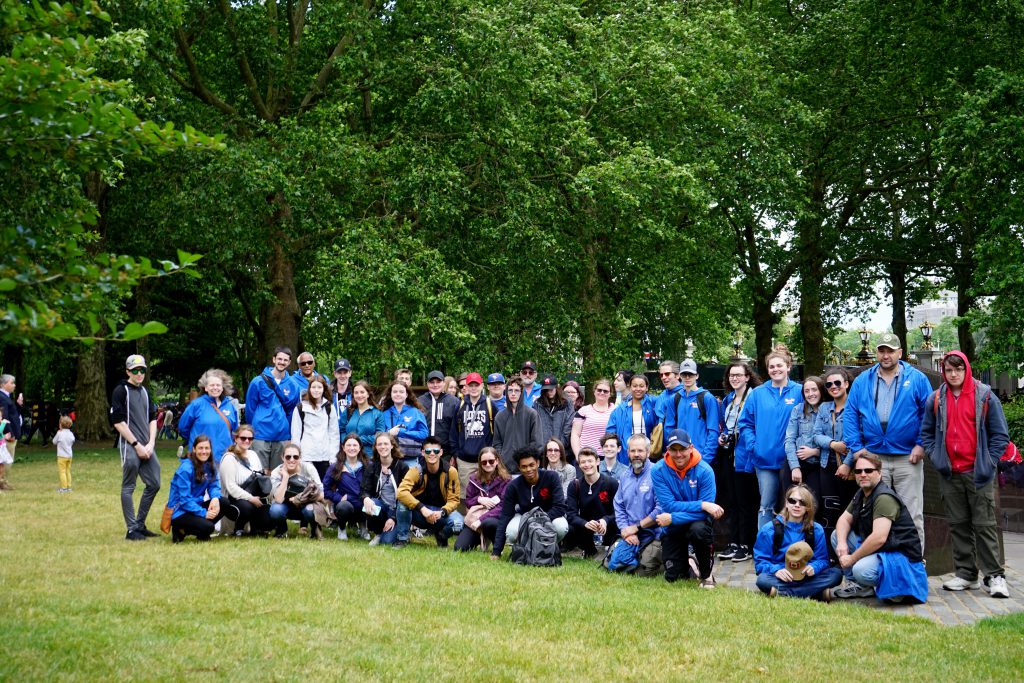 Arriving in Normandy, France to take part in the 75th commemoration of D-Day on June 6, 2019, a group of PVNC students and educators described what it was like to stand on Juno Beach and take in the experience.

“I remember when my parents had taught my brother and I about World War Two and about what had happened overseas. Learning about it from books and TV documentaries was the best I thought it could be, but actually being on the beach, standing where these soldiers fought and fell will always be the most meaningful memory to me. When you walk the sands of Juno, they walk with you.”

A group of 44 PVNC students from St. Stephen CSS, St. Thomas Aquinas CSS in Lindsay and St. Peter CSS in Peterborough along with their chaperones began their European tour in Amsterdam before making their way into France where they visited monuments in Dunkirk and Dieppe among other important sites.

On June 6, 2019, the students arrived at Juno Beach to take part in D-Day ceremonies. Seventy-five years ago, on June 6, 1944, 14,000 Canadian assault troops stormed Juno Beach in Normandy as part of the Allied invasion.

They fought a battle that culminated in the liberation of Europe. The 3rd Canadian Infantry Division, reinforced by the 2nd Canadian Armoured Brigade, faced a barrage of firepower from German soldiers as they navigated a heavily mined beach. They engaged in fierce hand-to-hand fighting as they moved across the beach inland.

D-Day would come at a terrible cost. Canadians suffered 1,074 casualties, including 359 killed, according to the Canadian War Museum.

“The D-Day anniversary celebration was really cool, seeing what the soldiers had to deal with 75 years ago. I know it’s not the same, but it gave me a better idea of what they had to deal with.  It was nice seeing the few remaining veterans being there and getting the respect that they deserve,” said Roderick Bawcutt, a Grade 10 St. Peter CSS student.

“My favourite part of the event was being able to see the vets and hearing all their stories was very heart warming,” added Abby Hartle of St. Thomas Aquinas CSS.

As former army cadets of the 2672 Hastings and Prince Edward Regiment, brothers Cameron and Jakob Keeling of St. Peter CSS said “it was good to be able to honour our veterans by attending the D-Day ceremonies at Juno Beach.  It made us proud to be Canadian.”

Security was challenging in France in the lead-up to the June 6 ceremonies. Despite leaving hours early, the PVNC group was hung up at road blocks and missed their rendezvous at the meeting site at the Bény-sur-Mer Canadian War Cemetery. Fortunately, the group managed to secure a police escort to Juno Beach, which allowed them to make the ceremony just in time.

“Persistence prevailed and we made it to Juno Beach with the required police escort, about a half hour before the ceremony began,” explained St. Peter CSS teacher Linda Gendron.

During the trip, Gendron had the opportunity to visit the gravesites of relatives who fought and died during Second World War. During the D-Day ceremony, she reflected on their sacrifices

“My grandmother’s grandparents lost four grandsons in WWII. All four arrived in Normandy on D-Day. None of them made it back home and are buried in Canadian cemeteries overseas,” she said.

While much of Juno Beach was closed to visitors due to security reasons, students and chaperones had the opportunity to investigate remarkably well preserved German bunkers closer to Omaha Beech.

The next day, the group left for Paris and finished their trip in London where among other sites, they visited the 2,000-year-old section of London Wall built by the Romans, Buckingham Palace and the British Museum.

Photo: The group poses for a photo at the Canada Memorial in Green Park in London, which pays tribute to the nearly one million Canadian and Newfoundland men and women who served in the United Kingdom during the First and Second World Wars. In particular, it honours the more than 100,000 brave Canadians and Newfoundlanders who paid the ultimate sacrifice for peace and freedom.

Reflecting on a big year for Deep Learning at PVNC ›