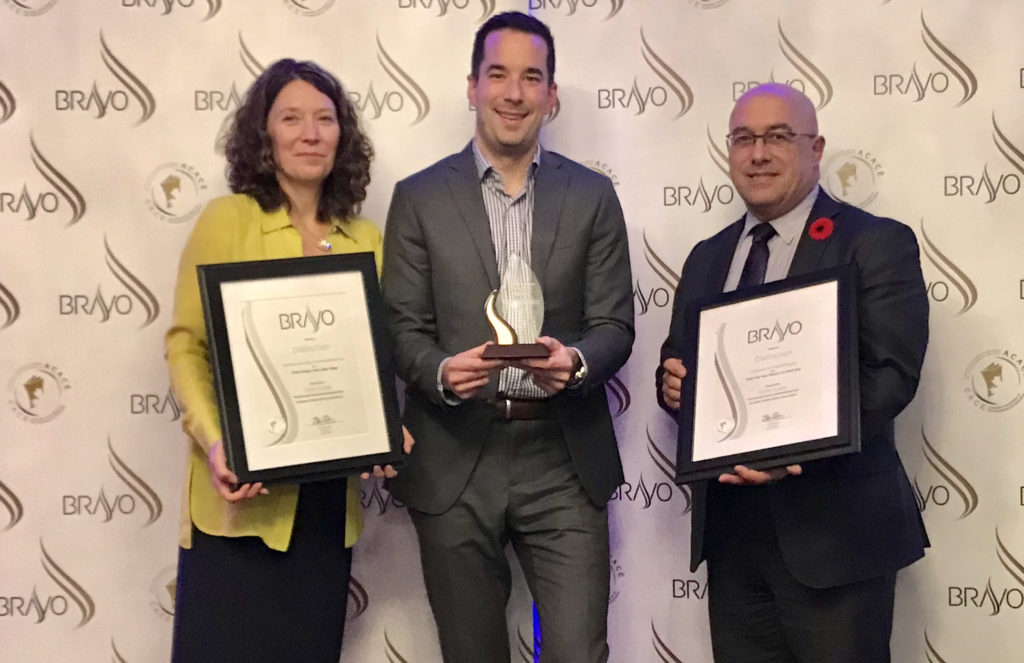 PVNC was a big winner at the Canadian Association of Communicators in Education (CACE) Bravo Awards in Toronto on Oct. 29, as the Board’s communication manager Galen Eagle won three national awards for school board communication.

The Bravo Awards recognizes and honours exemplary work in all aspects of school public relations, communications, marketing and engagement. BRAVO Awards of Excellence, Distinction and Merit are presented annually at the CACE conference.

The awards ceremony is the highlight of the annual CACE conference, which brings together

communication professionals from school boards across Canada for professional development and to share best practices from coast to coast.

Eagle earned a Bravo Award of Excellence for a campaign that featured the Bat Rangers of St. Mother Teresa Catholic Elementary School in Courtice. An online video PSA that showcased the Grade 1 students’ work to save the endangered little brown bat received more than 90,000 views on Facebook and helped spearhead an ongoing project to build and install bat sanctuaries in the Durham Region. The communications campaign was also instrumental in spreading the teaching concept of Deep Learning board-wide.

Eagle was also awarded two Bravo Awards of Distinction, one for the Board’s Put Your Director to Work Day fundraiser for the United Way, and a video project called “Voices that Listen,” highlighting the Board’s 2017 Indigenous education student leadership retreat.

“I feel grateful for my role at PVNC. I get to work with creative, passionate colleagues, educators and students and find new and engaging ways to tell our stories,” Eagle said. “Being recognized for these projects by my peers in school communication from across Canada is extremely rewarding.”

Photo Caption: PVNC Chairperson Michelle Griepsma, communications manager Galen Eagle and Director of Education Michael Nasello celebrate after the Board earned three Bravo Awards for excellence in school board communications during the Canadian Association of Communicators in Education conference in Toronto on Oct. 29, 2018.

PVNC Robotics Competition to be bigger than ever ›