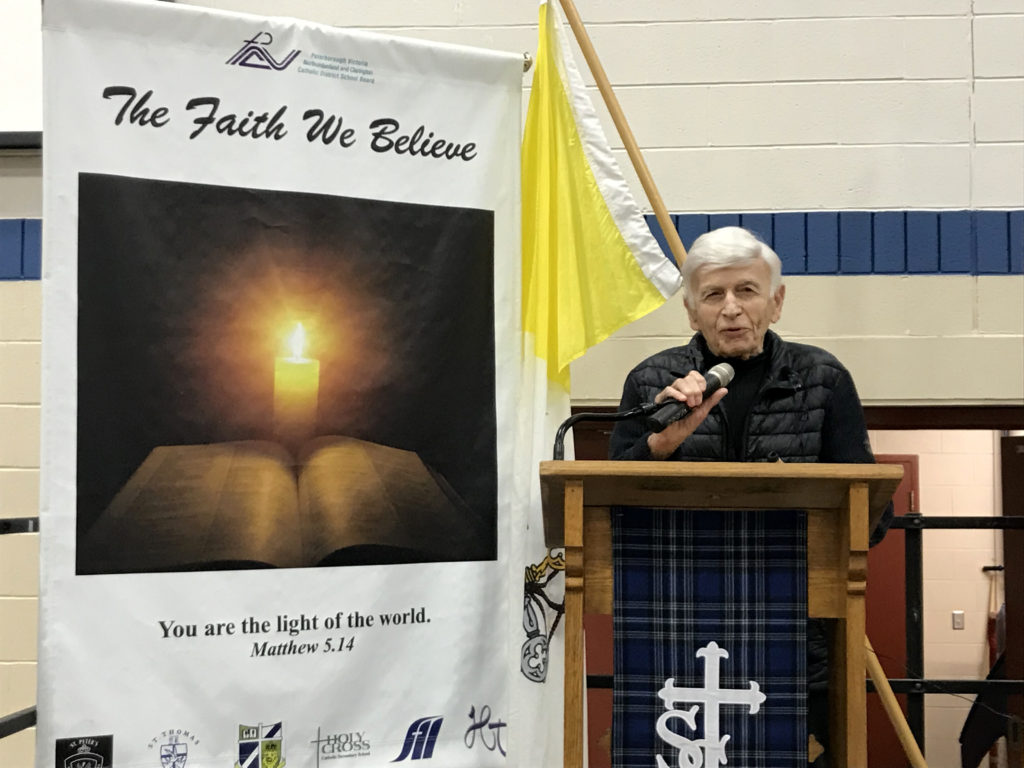 It was a gymnasium packed full of high school students, but the crowd was stone silent as 90-year-old Max Eisen took the stage and detailed how at the age of 15 in the spring of 1944 he and his family were forced from their home, brought to a brickyard and eventually loaded onto crowded cattle cars bound for Auschwitz-Birkenau.

Eisen spoke to students, staff and visitors at St. Stephen Catholic Secondary School on Friday, Feb. 8 about his experience as a Holocaust survivor, events detailed in his bestselling memoir By Chance Alone.

“I think about it often, how does one survive something like this?” he told the students. “I lived through a traumatic and cruel period of history. There are important lessons to be learned.”

Eisen was born in Moldava, Czechoslovakia into an Orthodox Jewish family. But in the spring of 1944 — five and a half years after his region had been annexed to Hungary and the morning after the family’s yearly Passover Seder — gendarmes forcibly removed Eisen and his family from their home.

At 15, Eisen survived the selection process at Auschwitz-Birkenau and was inducted into the camp as a slave labourer. One day, he received a terrible blow from an SS guard. Severely injured, he was dumped at the hospital where a Polish political prisoner and physician, Tadeusz Orzeszko, operated on him. Despite his significant injury, Orzeszko saved Eisen from certain death in the gas chambers by giving him a job as a cleaner in the operating room. After his liberation and new trials in Communist Czechoslovakia, Eisen immigrated to Canada in 1949, where he has dedicated the last 22 years of his life to educating others about the Holocaust across Canada and around the world.

“I am inspired by the need to document my story so others may learn from the past. On a personal level, I have a highly developed sense of observation of the world around me, which constantly inspires and motivates me to take action,” Eisen said to CBC as part of the Canada Reads competition for which his book is a finalist. 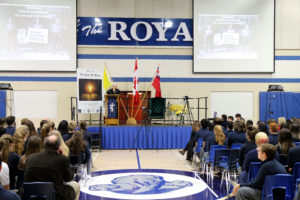 PVNC Director of Education Michael Nasello, who has known Eisen for more than a decade, introduced him to the audience.

“Max is a man of great courage, a man who is not afraid to speak the truth and to articulate stories of what happened many years ago,” Nasello said. “These stories are still extremely relevant today because the forces that were at work during the rise of the Nazi Party in Germany at the time of World War II are still at work today.”

This summer, Nasello and a group of PVNC educators, will be leading a group of more than 30 students to Germany and Poland as part of the Board’s Educational Holocaust Program.

“Because of Max, I am proud to say that I am a witness of the things he is describing. I am very honoured to be leading this group to study about the Holocaust this summer,” he said. 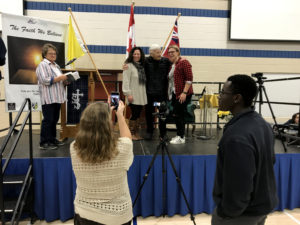 Holocaust survivor Max Eisen poses for photographs and signs copies of his memoir By Chance Alone.

St. Stephen CSS student Sophie Faessen, Grade 12, was among a handful of PVNC students who had the opportunity to attend a similar educational excursion in the summer of 2017, then offered as a joint program between PVNC and York Catholic District School Board.

That educational experience continues to influence Faessen to this day, she told her classmates from the stage.

“It was so powerful and extremely valuable for us to listen. It is important that we as young people hear the stories lived throughout the Holocaust. We need to ensure that they remain known and alive. It is our duty to those who experienced the Holocaust, those like Max Eisen,” she said.

Eisen’s book By Chance Alone is currently being championed as one of the finalists of CBC’s Canada Reads. The 2019 debates will take place March 25-28, 2019. 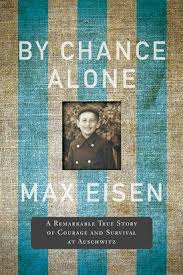