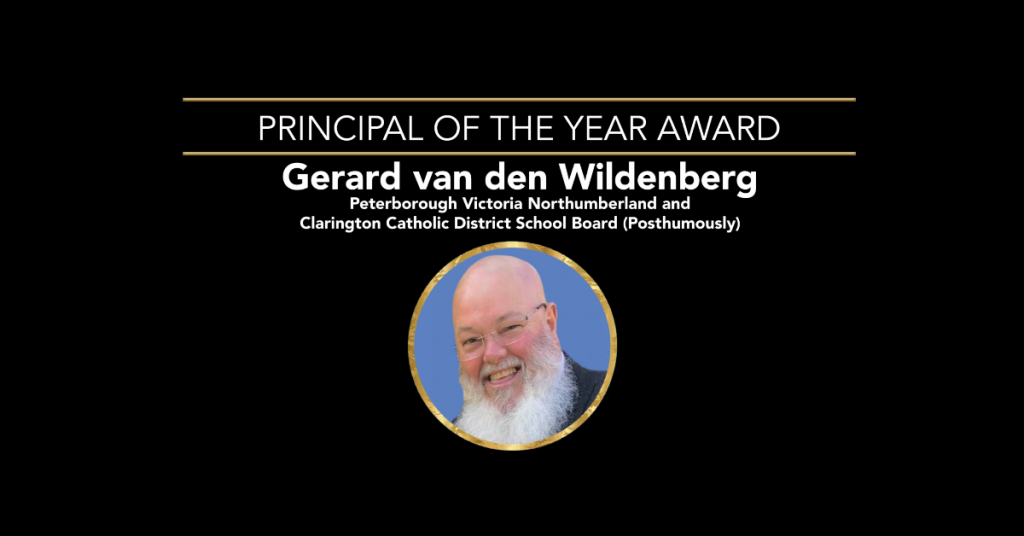 The Catholic Principals’ Council of Ontario (CPCO) posthumously awarded former PVNC principal Gerard van den Wildenberg with a Principal of the Year Award during its annual Gala and Award Ceremony in Toronto on Friday, April 22.

Family, friends and colleagues were present to acknowledge the honour and celebrate Gerard’s 28-year career as an educator.

A passionate proponent of Catholic education, Gerard was serving as principal at St. Elizabeth Catholic Elementary School in Bowmanville when he passed away suddenly at his home on Oct. 15, 2021.

In his 16 years as PVNC principal, he also served Good Shepherd CES in Bowmanville, St. Mother Teresa CES in Courtice and St. Mary CES in Grafton.

“Gerard van den Wildenberg was one of the finest examples of a Servant Leader. He was an incredibly faith-filled man who served God and others. He believed in stewardship, leading by example, building community and developing the organization,” the CPCO wrote.

“Gerard lived a life of prayer. When necessary, he used words to motivate, inspire, champion and advocate for his colleagues. We are grateful for his presence, wisdom, witness, faith, mission and dedication in the time we journeyed together in friendship and in Catholic education.”

Known for his sense of humour, Gerard was a popular colleague and served as past board president for the PVNC Catholic Principals’ Council of Ontario.

CPCO would like to congratulate Gerard van den Wildenberg from @PVNCCDSB who was posthumously awarded the Principal of the Year Award at the CPCO Gala Dinner & Award Ceremony 2022!#CPCOgala #CPCOGala2022 #PrincipalOfTheYearAward #Congratulations #Education @steveo_sullivan pic.twitter.com/8OU6Omwghu