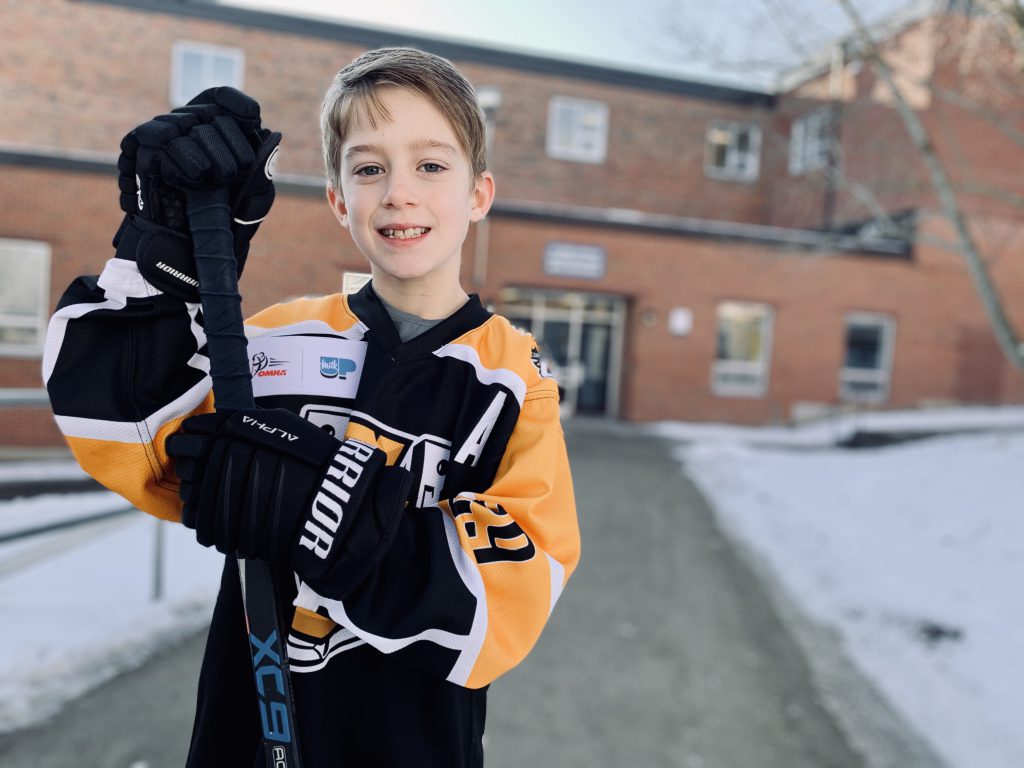 If there’s one regret eight-year-old Gordie Gilders has after his whirlwind experience staring as a young Wayne Gretzky in the recent Tim Horton’s commercial called “The Autograph,” it’s that he still hasn’t had the chance to meet the Great One himself.

But that hasn’t dampened the experience of playing the hockey icon in the high-profile ad campaign that was heavily promoted throughout the holiday season, particularly in heavy rotation during the World Juniors tournament that saw Team Canada bring home Gold.

It’s 1968 in Brantford, Ontario. The young Gretzky (played by Gilders) is in the passenger seat of his parent’s car. He arrives at a local Tim Horton’s where Tim Horton himself is signing autographs. Wayne makes it to the front of the line only to realize he hasn’t brought anything to sign. Tim Horton removes the napkin from under his coffee cup and signs it – “Wayne, best wishes, Tim Horton.”

Flashforward to Wayne on the backyard ice rink, to the halls of a crowded arena, to his Stanley Cups in Edmonton, to a history making career, to greatness.

It’s a commercial that plucks on a lot of Canadian heart strings and it has been viewed hundreds of thousands of times over recent weeks.

In fact, Gordie was watching the World Junior final between Team Canada and Team Russia with a group of friends when his commercial appeared on air.

“My friends and I were playing video games. Canada was losing. My commercial came on. It was really exciting, really fun. When they came back from the (commercial) break, Team Canada started doing really well,” Gordie said.

Gordie’s parents – Teresa and Kyle – noticed the casting call for the commercial in September. The casting agency was looking for a “skinny, blonde kid” to play a young Wayne Gretzky and Gordie really fit the description.

Gordie plays novice hockey for the Campbellford Colts, but he’s never acted before. His mother Teresa sent in a photo and some footage of Gordie playing hockey.

“You don’t know if you don’t try,” Teresa said.

She thought that was going to be the extent of it until she received an email saying Gordie had been selected for a live audition in Toronto that week.

Gordie arrived in Toronto to learn he was one of 64 kids out of some 50,000 applicants to be auditioning for the role.

That audition turned into two more as the numbers were cut from 16 down to a final three.

“The whole school was behind Gordie…we just knew he was going to get the role.”

Teresa was volunteering at St. Mary’s lunch program when she got the call letting her know that Gordie got the role. She stepped into Gordie’s classroom to share the news and the whole class broke out into celebration.

“Everyone at the school has been over-the-top amazing,” Teresa said.

Following the two days of filming in Toronto, Gordie arrived back at school to find a banner hanging on the school proclaiming it as the “home of Gordie Gilders.”

“The whole school was behind Gordie,” principal Jason Roberts said. “When his parents excused him for the auditions, we just knew he was going to get the role. He’s not an actor, he’s just a really nice, genuine kid who loves hockey and he really does look like a young Wayne Gretzky.”

Gordie is still getting used to the spotlight. People recognize him on the street now and he may have some acting opportunities in the future

But for now it’s back to school and back to the hockey rink where Gordie most feels at home.