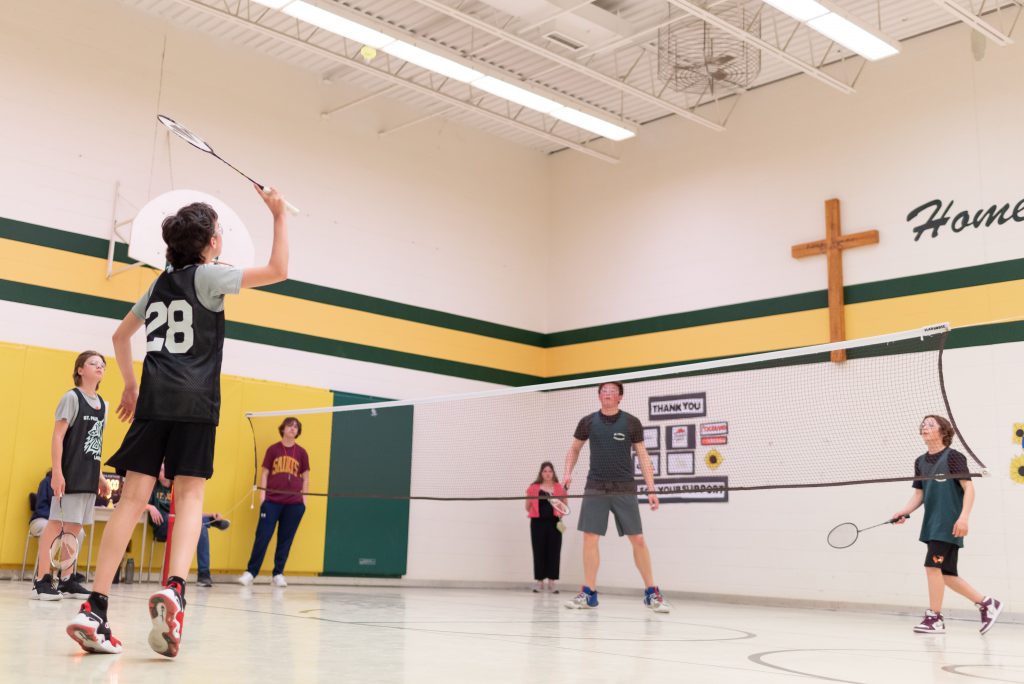 St. John’s Catholic Elementary School grade 7 and 8 students used their racquets and birdies to raise money for their “United for Ukraine” two-day badminton tournament held on Wednesday, May 4 and Thursday, May 5. 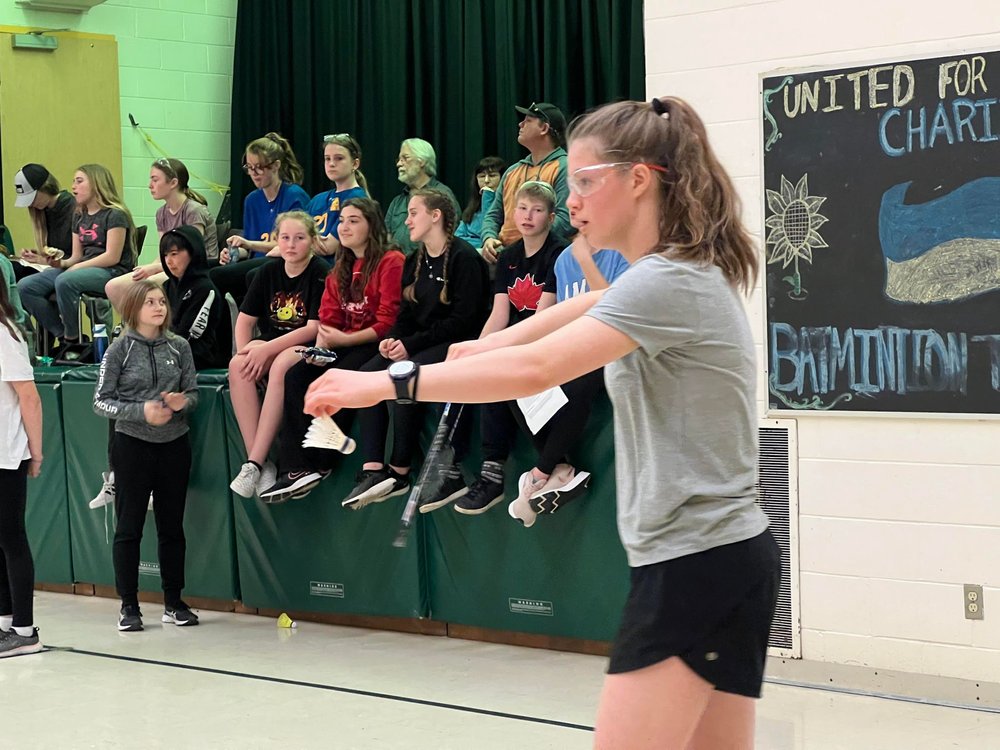 Nine other schools within the Peterborough Victoria Northumberland and Clarington Catholic School Board were invited to participate and contribute to the cause.

The money is going towards the New Canadians Centre Welcome Fund which aids refugees and immigrants with mental health services, employment opportunities and other services.
“The kids have been working on this for a couple of months now as a ‘deep learning’ project,” said Stacy Higgins, St. John’s grade 8 teacher. “They learned about what was going on in Ukraine and wanted to help.”

“We did a little bit of research on Ukraine and we were talking about it a lot in class,” said Jayden Hopkins, 14, St. John’s grade 8 student. “We haven’t really haven’t had any schools come over in a long time because of COVID so we thought this would be a great way to help our community and help the refugees but also have a fun time.” 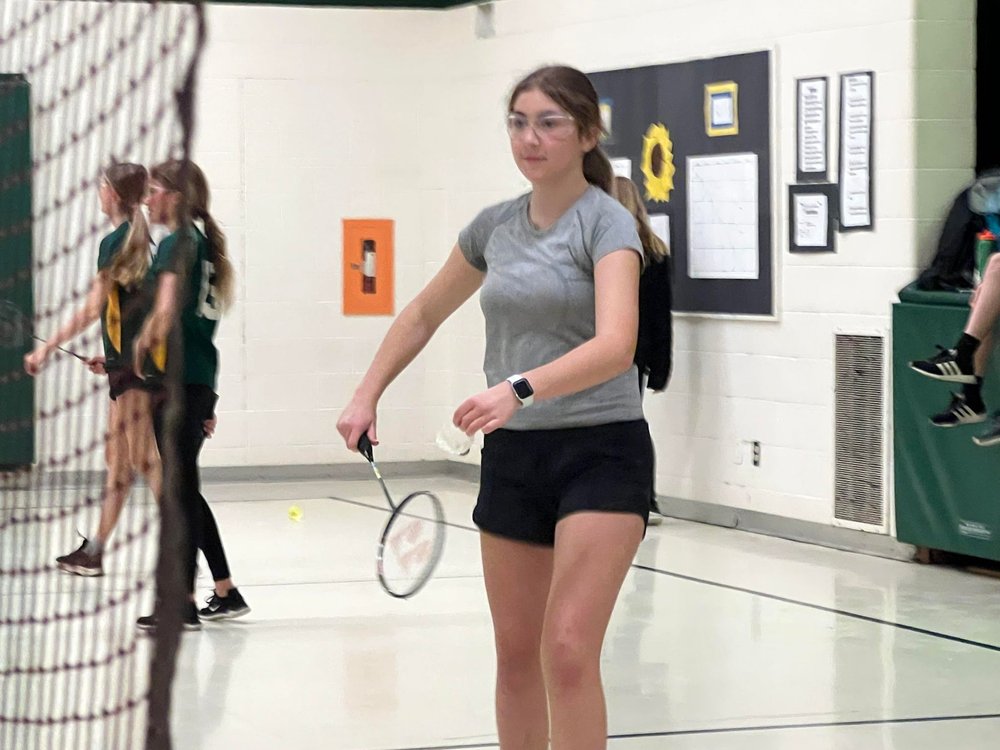 ST ANNE’S GRADE 8 STUDENT SEQUOIA SOUBLIERE (PICTURED), 14, WAS ONE OF THE FINALISTS FOR THE GIRLS’ TOURNAMENT. PHOTO BY DAVID TUAN BUI.

St John’s students were responsible for contacting other schools to get them involved, reach out to sponsors and organize the event.

“It took a lot of effort, we had to call a lot of places and we’re so thankful for our sponsors to help donate food, drinks and flowers, said Hopkins. “It was a lot of hard work to make those signs, and call the different places, it was a lot of work but it was worth it.” 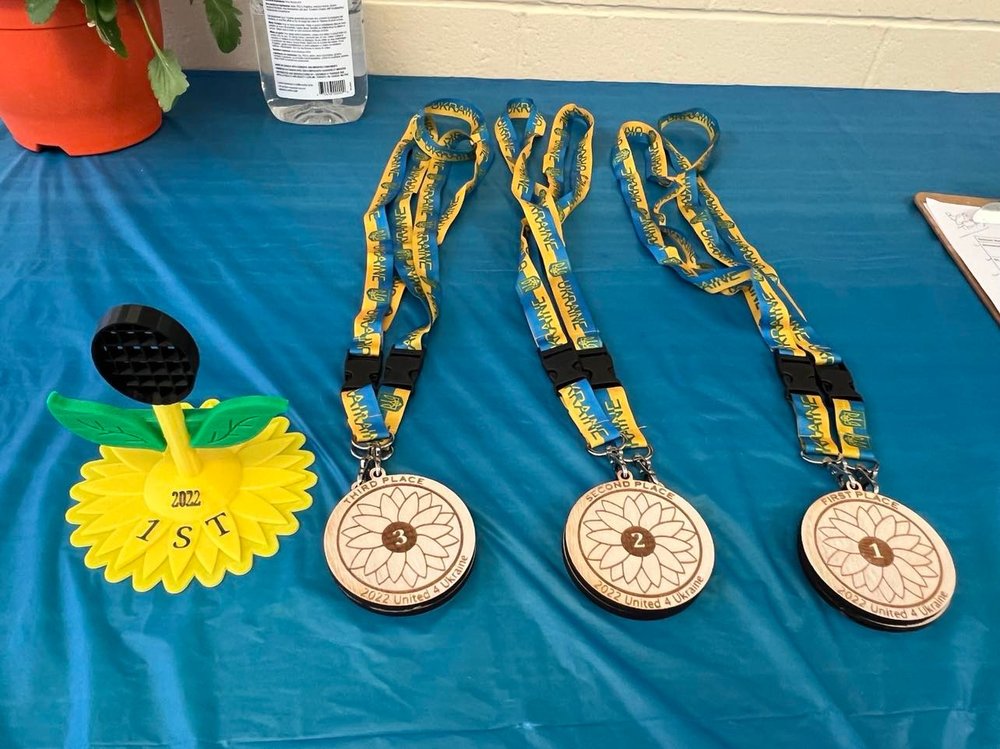 ALL THE AWARDS WERE DESIGNED BY A ST. JOHN’S STUDENT WHILE HOLY CROSS SECONDARY SCHOOL CREATED THEM. PHOTO BY DAVID TUAN BUI.

The students reached out to Holy Cross Secondary School where teacher Mike Whibbs helped created the awards from the shop class. The first-place trophy was designed by a St John’s student and made with a 3D printer.

The amount of effort and work put into the tournament was rewarding according to the St. John’s students.

“It’s very nice to know that we’re helping families coming to Peterborough and the surrounding area,” said Reed Lain, 13, St. John’s grade 8 student. “Not many people have done stuff since Covid, everyone’s been inside so it’s pretty good for the teams playing.”

Each school had two girls and boys represent their respective schools to play in the doubles tournament while contributing $100 for each team.

The girls’ tournament was held on the first day with the boys’ on the following day.

‹ PVNC INSPIRES: May Roundup from the Classrooms