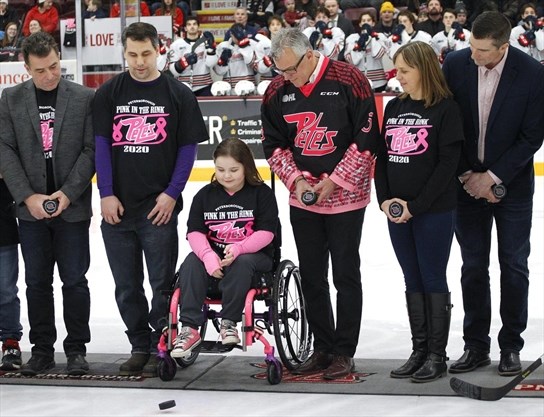 Prior to Saturday’s Pink in the Rink game at the Peterborough Memorial Centre,  Neave Alderson, a brave Grade 7 pupil at Immaculate Conception Catholic Elementary School battling a rare bone cancer, dropped the ceremonial faceoff with her teacher Mike Martone. Martone is a former Petes captain and honorary Pink in the Rink co-chair with fellow Petes alumnus Ian Armstrong, a cancer survivor.

The 11th annual Pink in the Rink again exceeded expectations.

Following a live auction of Peterborough Petes commemorative Pink in the Rink sweaters, worn in a 4-1 win Saturday night over the Oshawa Generals, the fundraising total sat at $88,194.72, well ahead of the $72,000 goal.

Neave calls herself a cancer warrior.

“A warrior never gives up,” said Neave, 12, who has undergone nine surgeries since her diagnosis of Ewing’s sarcoma in July 2016.

It was important for her and parents Kate Murphy and Shane Alderson, also teachers at Immaculate, to participate as a way of saying thanks to those who support them.

“It’s nightmare,” Murphy said, of watching her daughter battle cancer, “but we live in an incredible community that really rallied behind us when we needed them and they still do. That’s why it’s important to do things like this and give back. It’s a way of saying thanks but also letting others know they aren’t alone. It can happen to anyone.”

Alderson described his daughter as a fighter.

“You put the name Neave into an iPhone or Apple product and it autocorrects to brave,” he said.

Alderson said Martone has been a pillar of support to the family.

“Mike was a leader with the Petes. He’s a leader in our school. In our community he’s definitely a leader,” Alderson said. “Martone is a special dude.”

The special one, Martone said, is Neave.

“Neave is one of the toughest people I know,” Martone said. “I played against and with a lot of guys who thought they were tough. You don’t know what toughness is until you see someone like Neave battle this disease at a young age.”